The rain picked up its game overnight and we sloshed into a flooded Chetumal just before 6 am. Unbeknownst to me (and Google Maps…) the terminal had moved and was some distance from where the local buses operated out of. We found there was a bus heading to Belize City leaving from that terminal at 7.30, but getting on it was a disorganised, confusing matter. Ended up getting the three girls on it, but not enough room for myself and the remaining Ukrainian girl. The two of us decided to get a taxi to the local bus terminal as it was far too wet and flooded to walk the distance. 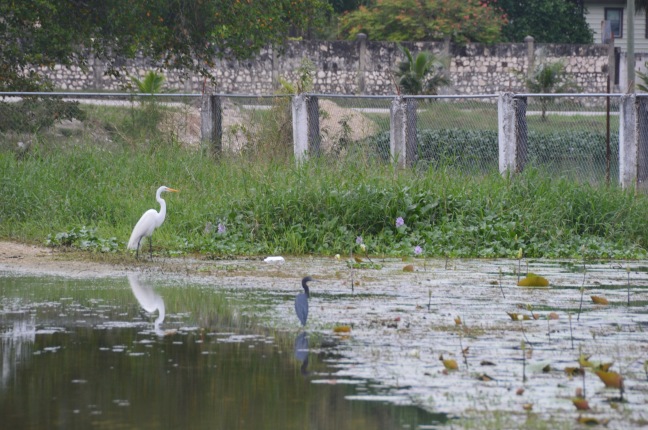 Had something to eat while waiting for the bus and watched the market world wander by. Eventually my dilapidated chariot arrived and we were off to the border. Formalities on both sides dealt with and we were rumbling through the Belizian countryside. With the wind in my hair and a sumptuous scenery of waterlogged fields punctuated with pretty pastel clapboard shacks, I thought I would be able maintain consciousness. However, sleep was utilising all her sneaky lures and I found myself drifting off.

It was lovely to quickly glimpse those towns I visited two years ago, even from a bus window. Corozal, where I spent a very special Christmas with an Alabaman expat family I had met at the guesthouse I stayed at. Orange Walk, where I unwittingly stumbled across a drug deal and managed to survive. The road to Crooked Tree that I hiked down to find the road flooded and was taken to the village by boat. Belize City, where a large, drug crazed black man tried to break into the guest house compound before pelting the front with rocks early New Years Day.

Eventually arrived at Belize City and had a 45 minute wait for the next bus I needed. I decided to go straight down to Punta Gorda in southern Belize from where I would be able to catch a boat to Puerto Barrios in Guatemala. From there it’s only a short bus ride to the the Honduran border. I had done the trip in reverse on my last trip through here. After jolting along for several hours, I found myself reaching my practical limit and vowed to find some way of flying back to Cancun from El Salvador to meet my connecting flight.

We reached Punta Gorda just before 9 am and I got directions for a guesthouse I had found in the Lonely Planet. I prayed they had a spare room as it was late and I was running on empty. Fortunately, the Travel Gods took pity on me and decided I had been punished enough. Tate’s Guesthouse was one of the nicest I had stayed in. A bit on the pricy side (for Belize), but I was beyond caring. I had been travelling more or less non stop for 55 hours and was desperately in need of a hot shower and a bed to crash in. Here I found both. Ahhhh.

One thought on “Cancun – Punta Gorda ”