After a lovely stop over in La Esperanza, it was time to push on. Marcala beckoned, like a saucy siren, with promises of a large cave on its outskirts. Along with colonial history and an indigenous flavour, this solitary sailor was hooked. I got directions to the bus terminal and walked to catch a minibus to this much touted (in the guidebook) town. 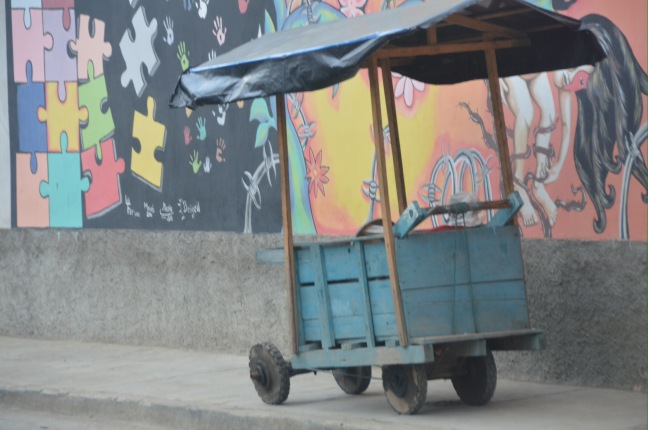 I was warned by the hombre at my hotel in La Esperanza that the road to Marcala was in poor condition, but compared to some roads I’ve driven on in Australia, it wasn’t really that bad. Though to a Landrover driver, what seems ‘not that bad’ could be seen as somewhat questionable to others… It was a beautiful drive through pine clad hills, past gullies where small streams gurgled ever downwards. As everywhere, farmers had carved their little niches into the countryside, with small crops nestled in the surrounding forest. 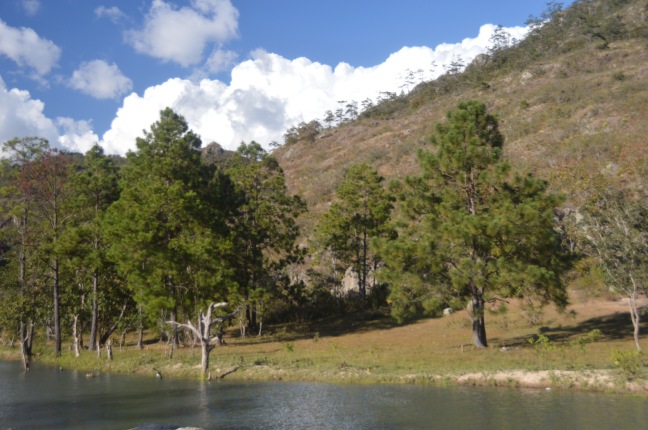 It was midday by the time I arrived in Marcala and got directions to the town centre. It was a hot, dusty walk, though it was pretty easy to find the main road into the centre – it was the only one paved! I eventually came to a large square sectioned off with shiny bright corrugated iron. No prizes for guessing that this was the town plaza. Closed for renovation. I got directions to the tourist office where I had been assured in my guidebook I would be able to secure good directions to my much lusted after cave.

It appeared that the ‘tourist office’ was more like a ‘tourist officer’ who latched onto me with relish. I couldn’t have had more personalised attention. Even though I struggled with her thick accent, she assisted me as best she could and even escorted me to the hotel I had chosen out of the guidebook. Estheffany assured me that they got lots of tourists to this part of the country, but I had my doubts that they were of the foreign kind. After assisting me to check into the hotel (including coming up with me to check the room!), Estheffany told me to contact her if I needed any further assistance. I thanked her and bid her adios. 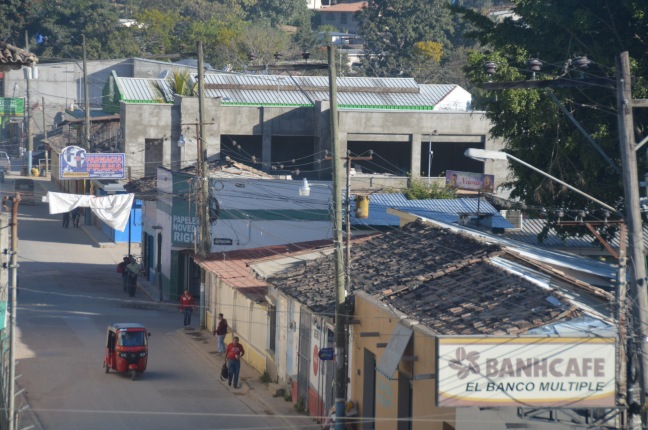 A quick bite to eat, then it was off to negotiate a taxi to take me out to the parque I needed to get to as it was several kilometres out of town. We drove past a tiny settlement and I was dropped off at a locked gate just beyond. I organised with my driver to return later in the afternoon and trotted off down the dirt road. It was lovely walking in the Honduran highland countryside without a soul to be seen. Even though my driver had instructed me to keep to the left, I spotted the river to my right and went to investigate. A very pleasant stroll along the river led to a large pool of water under a cliff where water was cascading down from a above. A small crevice was behind the waterfall but nothing of significance. 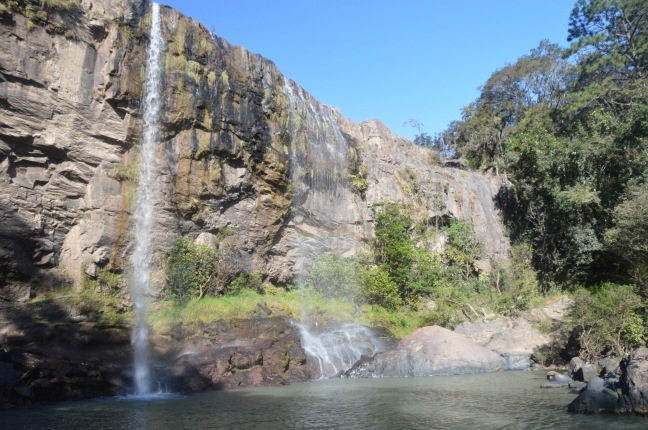 I made my way back out of the gully to the dirt road and continued my journey. The stream above the waterfall had been dammed and there was irrigation pipe going in every direction. Clearly this was a major irrigation point for the area. It was truly a tranquil area with a couple of horses quietly grazing on grassy banks leading to pine forests. There were a few small wooden structures suggesting stalls of some description, however, I saw no other person the entire time. 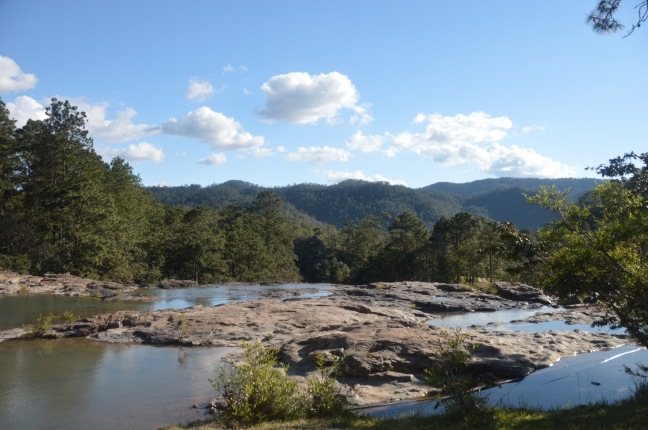 Looking for an obvious path to what I thought was a major tourist attraction, I followed a path along the stream for a further few hundred metres. Realising I had probably passed the cave, I backtracked and made my way up a precarious pathway up the side of the hill. When I reached the top, I met with the track I should have taken. From there, it was only a short stint to the cave. 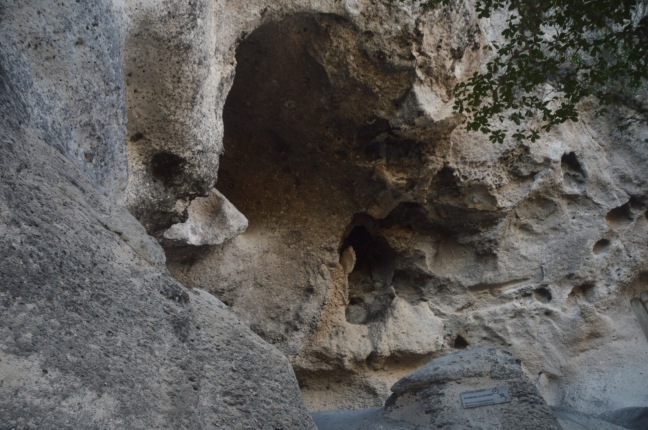 La Cueva Gigante was a total misnomer in my eyes. From what I could gather, it was more a recess than an actual cave, but as I couldn’t access it, I couldn’t be sure. It was a major archeological site and the crumbling remains of a concrete bridge was a tantalising former means of entering the site. As it was getting time for me to return to meet my taxi driver, I cut my losses and made my way back to the tiny settlement where I had been dropped off. Even though, I didn’t get to go in a cave, it was still a magical meander through the local countryside. 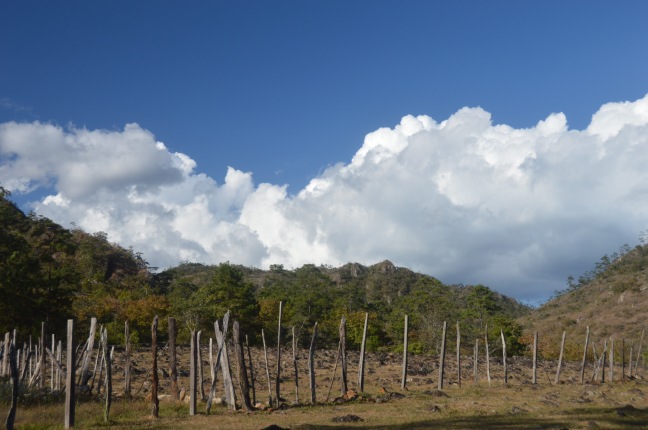 My driver returned and we made our way back into Marcala. Hot and sticky, the cold shower didn’t seem like such a terrible option now. Freshened up, I found a restaurant overlooking Parque Central in the guidebook that had wifi and local cuisine. A well presented woman came over to me after I had eaten and introduced herself. She was the owner of the lovely restaurant and I found out that the Parque Central had been closed for four months and would be closed for another three. Even though the Parque was completely boarded up, one could see the trees which dominated it. I can only imagine it would be a beautiful little place for the locals to chill and enjoy.