The wind picked up during the night and the loose fitting metal door rattled loudly in its frame. I was able to solve the problem by laying my backpack along the edge of the door, thus stopping the wind from blasting in as well as silencing the door. Morning dawned and I got my first glimpses of this pretty town in daylight. One could see spectacular mountains from the balcony outside my first floor room with clouds creeping over the tops. I had planned on climbing to the top of one of these mountains to a lookout, but first needed breakfast.

I decided to check out a much touted bakery in the guide book for breakfast and fuelled up with great coffee and a couple of pastries. It looked a popular spot for locals as well as the place started filling up not long after I got there. Thus fortified, I was ready for my hill climb. Cerró La Cruz is the town’s cross which is firmly perched on a rocky ridge high above town. It was placed there in 1703 by Franciscan Fray Margil de Jesus. The effort it would have taken to trudge a kilometre up the steep terrain with a supersized cross made this effort pale well beyond ‘something to do one sunny Sunday’ and more in the ‘paying penance for some heinous deed’ category. Although it might have just been that the fine Fray had a mighty big point to make about his devotion to the good Lord.

The path up to La Cruz was through the town cemetery which was a colourful affair of graves and mausoleums nestled into the base of the hillside. After climbing a steep path, one entered the reserve and a series of concrete steps continued zig zagging up to the top of the ridge. The cloud forest was truly spectacular and a riot of flowering plants in its midst enhanced the splendour. One lost sight of the cross as soon as one started on the steps, so it was difficult to gauge how much further one had to go as the thick forest obstructed vision to the top of the ridge. You could only just keep climbing ever upwards and know at some stage you would eventually get there. 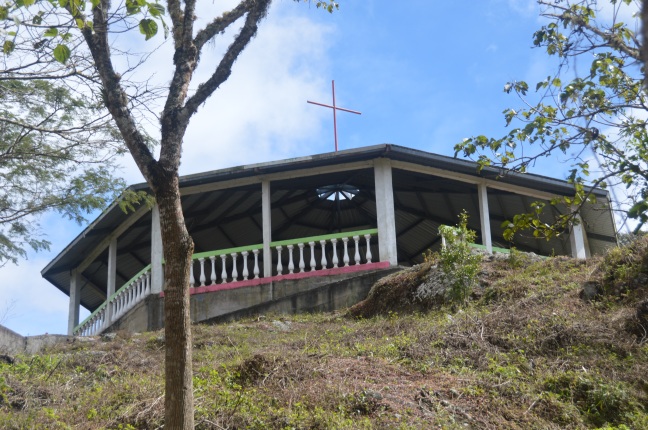 On top of the ridge, a dirt track led to the top of the peak to La Cruz. A brightly coloured observation pavilion was in prime position for 360 degree views and another short climb led to the cross itself, firmly planted in a pile of large boulders and facing the town far below. The views were magnificent; not only over the whole of Jinotega but of the hinterlands and Lago de Apanas in the distance. After enjoying the vista, I headed back down the hill and back through the cemetery.

I wanted to go out to visit one of the communities in Lago de Apanas I had read about in the guide book, so headed to the bus terminal. I was directed to a bus which supposedly would take me to Sisle, however, on chatting to a señor standing next to me I found out I would need to get off at a crossroad and wait for a connecting bus. This I managed, but it ended up being later than I was planning on getting to the area. I got dropped off at the top of a dirt road down to Sisle Malecón, but found it deserted and the few shacks there shut. So much for my fresh fish meal I had been looking forward to! 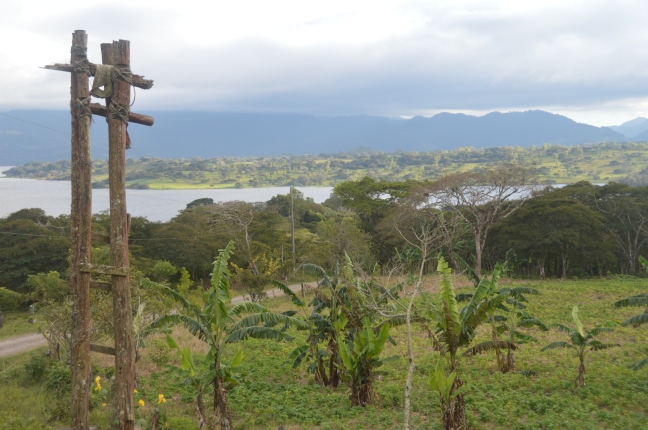 I walked back up the hill to the little tienda on the corner to make enquires about the next bus heading back to Jinotega. There was a highly inebriated señor who greeted me when I stepped onto the porch and tried to embrace me with an unpleasant fervour. Whilst trying to sidestep and push him away, I was able to find out from the senor in the tienda that the next bus would be along in about 15 mins. I asked to use their facilities which ended up being a drop toilet perched up on a ledge.

Skipping past the usual menagerie of pigs, dogs, cats, chooks and a horse, I encountered my sodden señor again. He declared he quite liked me and was very persistent in his advances. I moved over to a small clearing next to the tienda to try avoid him and encountered another crazy. This one was muttering and shouting about something I think only he was aware of. I decided to move to the other side of the road to avoid them both, but my sodden señor followed and decided he was coming with me to Jinotega. I was silently wishing there was some sort of entity which would make this damn bus appear and get me the hell out of there. On cue, my salvation in the form of a giant lumbering yellow bus came rumbling up the hill. I thought that sorted the issue out, but sodden señor kept following declaring his undying adoration. It was at this point I told him I was married and had a husband back home. In cases like this, it is always handy to have an imaginary hubby in your back pocket you can use to throw at unwanted attention.

Safely ensconced on my bus, I could finally see the scenery I had missed coming out here due to having to stand the whole way on both buses. It was very pretty country and I was glad I had the opportunity to see it. Back in Jinotega, we were dropped at the same spot as the night before so I knew where I was going. It was a very full day, so dinner and bed were high up on the agenda as I was leaving early the following day.