In Esteli one gets the 6 am air aid siren as well as the midday one, and today I was up with it! I had been told I needed to get the 7.15 am bus from a terminal that was about a half hour walk from the hostel, so set off in plenty of time to make the bus. The walk didn’t take as long as anticipated so I had time for some coffee before hopping on the bus.

All the other travellers that were going on the canyon tour were also on this bus and it felt strange to be on a local bus and not the only gringa for a change. I managed to get a seat up front which only had leg room for the person on the aisle side. A couple of locals checked out the vacant spot next to me and decided they neither could nor wanted to try to squeeze into the space. Eventually, a señor came along and I found myself sliding over into the legless territory with my feet where his should be. I managed with alternating between putting my right foot up on the wheel arch at intervals to regain what little sensation I could under the circumstances. 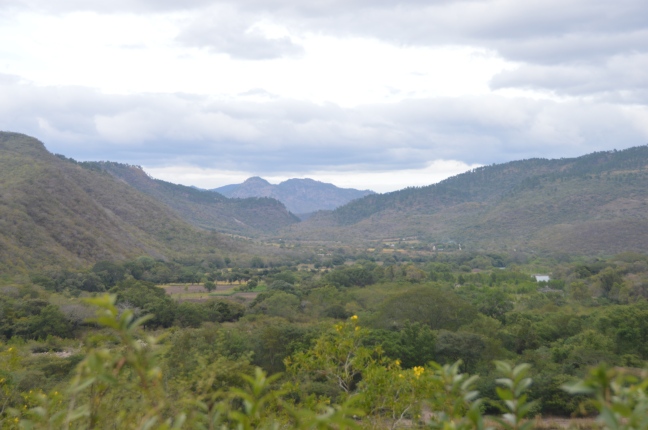 The bus roared along a relatively good road and amazing vistas revealed themselves at every twist and turn of the winding road. We were climbing deeper into lush forested hills, punctuated by verdant valleys. Tiny pueblos dotted the landscape and subsistence farmers eked out their existence in pockets carved out of the forest. Despite the discomfort of my seat, the trip was most enjoyable. Though circulation in one’s legs is not to be underrated.

I struck up conversation with my bus bud who was intrigued with my being from Australia. He told me he had broken his clavicle in a motorbike accident, then proceeded to show me an array of photos on his phone of his work and home. I had bought some plantain strips from one of the many vendors plying the buses at certain stops and shared them with my new friend. We munched on our snacks companionably as I answered his many questions about Australia.

We eventually pulled up at Somoto terminal and I was relieved to be able to get circulation back in my legs. A tall hombre by the name of Henry met us at the terminal and assembled his tour participants like a patient mother hen gathering her chicks. We walked over to the awaiting duel cab ute and I climbed into the tray with five others. It was fabulous whirling through the countryside from my windswept post. We pulled up at Henry’s property and the guides got us ready with life jackets and ensuring we had everything we needed. I handed over my camera in its snoop pouch for our guide to carry on his dry bag. 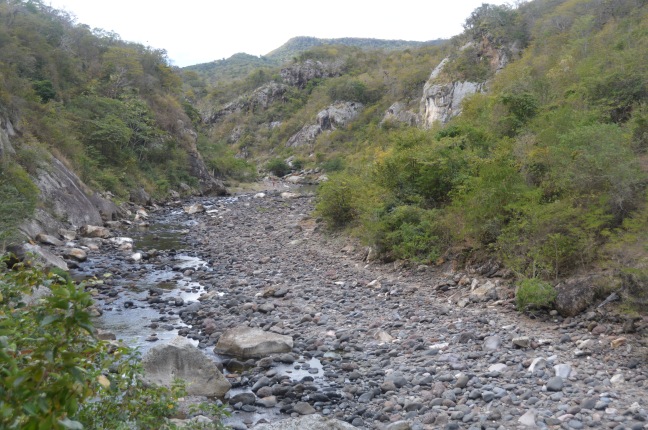 It was then a three kilometre walk to the start of the canyon, at first along the road where we passed horses and mules quietly grazing in their fields or on the roadside. We then turned off onto a dirt track which climbed a hill to give superb views of the river below and then down to the river itself. Volcanic boulders were everywhere. The whole area was basalt of various levels of degradation with the Rio Coco meandering through it all. This is the longest river in Central America and runs all the way to the Caribbean. A three kilometre natural gorge has been carved out with walls that close in to ten metres at its narrowest. There is a 160 m fall over the extent of the gorge which made for an interesting but fairly easy traverse.

We rock hopped, waded and swam the extent of the canyon, stopping occasionally for photos. At the end of the canyon we were all piled into a small rowboat and taken about another 500 m downstream from where we had another three kilometre walk back to the start. We passed a tiny casa on the edge of the river and had to dodge cattle slumbering peacefully on the track and one very contented pig having an awesome time snuffling in the mud at the edge of the river. 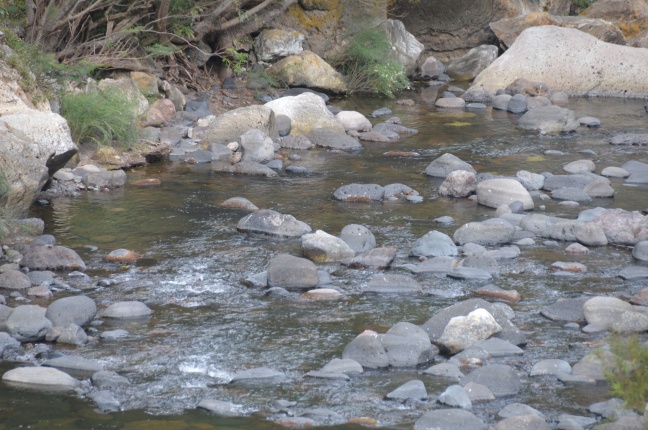 A steep hill which resulted in a magnificent vista of the river led to a Reserve checkpoint where we had to register our visit. Then it was just a short walk back to where we started. After changing into dry clothes, we went down for a hearty meal of chicken, rice and salad. A very welcome repast indeed! Two of the girls were staying on overnight, so the rest of us organised a lift back to the bus terminal to catch the 3.15 pm bus to Esteli. The bus everyone was catching was an express which was a bit more expensive and a lot more comfortable with individual seats which in some stage of their life had reclining capacity. The time was also shaved by about an hour as well. 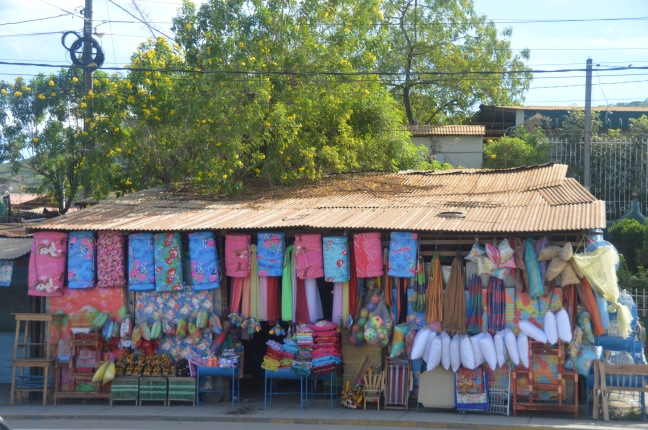 Back in Esteli, I messaged Susie and arranged to meet up with her and Ana for dinner. I was planning on doing another tour into Miraflor Reserve the following day but it ended up being too difficult so decided against it. We found a fritanga to eat at and had an amazing meal of fresh local food. All too soon it was time to bid my two new friends adios as they were leaving in the morning. I hope to meet up with them both when I travel to Costa Rica on my next trip.