I awoke during the night to find a small kitten had crept in through a hole in the mosquito net and had decided to snuggle up. My little feline friend slept quite contently on me the rest of the night. I found out later that the kittens belonged to the property next door but had been spending quite some time at the hostel. Another one of the kittens decided to check out breakfast and had to be shooed away by the hostel cook who wasn’t quite as sympathetic to its cause.

Jiquilillo is on the edge of Reserva Natural Estero Padre Ramos. The wetlands of this reserve contain the largest remaining mangrove forests in Central America and are federally protected. I inquired about a boat trip through the wetlands as I wanted to take photos and wasn’t prepared to risk taking my camera on a kayak. The cook rang her son who rocked up half an hour later on his motorbike. When I told him I had a 250cc Honda, he was impressed as that apparently is a big bike in Nicaragua. Most motorbikes here are only 150 – 200cc. I grinned thinking my little entry-level bike back home was hotshot here in Nicaragua.

We walked to the edge of the river delta where the family’s 25 year old longboat, hewn from a single tree, was waiting on the beach. Ernesto used thick tubes of polypipe to roll the boat towards the shore and into the water. We putted around the river delta chatting and soaking up the scenery. Ernesto turned into a narrow waterway and we dodged low lying mangrove branches as he putted down an even narrower waterway to pull up on a muddy bank. Above was a small hill which we walked up for an amazing vista of the coast, the communities and the wetlands below.

Back down the hill we returned to the boat and continued putting around the mangrove forest. We stopped where another boatload of travelers who were part of a volunteer scheme to re-vegetate lost stands of mangroves were replanting. I was handed a bundle of mangrove stems to plant so added my little bit to help maintain this amazing oasis.

Back ashore, Ernesto asked if I liked fish as his mother (the cook at the hostel) did a mean red snapper. It seems that Mama feeds the hostel’s non-vego guests at her own home and I was quick to take up the offer. Ernesto pointed out his mother’s house so I could find it later and walked me back to the hostel. I was planning on renting a kayak so I could have a private poke among the mangroves, but found I could only do it as part of a tour, so declined.

After spending a couple of hours rummaging through the mangroves, a dip in the ocean and a chill out on one of the hostel’s many hammocks seemed completely in order. After all, It wasn’t called Rancho Tranqilo for no good reason.

An afternoon walk along the beach gave me a chance to explore this largely undeveloped fishing village. Evidently a tsunami completely wiped out the village in 1992 and tidal surges still take their toll on unprotected properties. I stopped off at Monty’s Beach Lodge and chatted to the owner’s daughter. Monty is a Canadian ex-pat who came down to Nicaragua ten years ago to set up a surf camp. These days the Lodge caters more for volunteer travelers ranging from doctors, dentists, veterinarians, and scientists of many different fields. All to support the community and help make it more self sufficient. 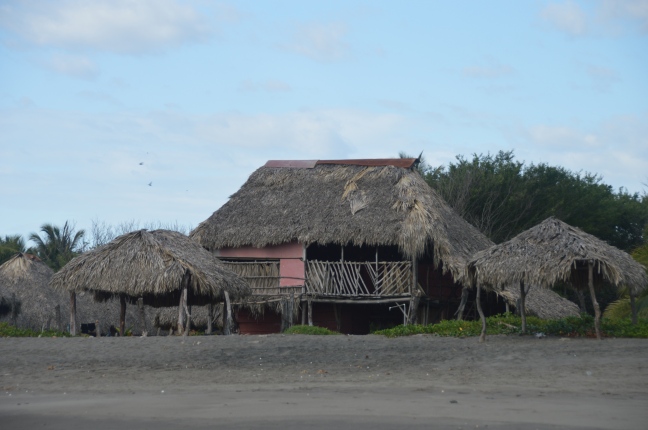 As it was getting later in the day, fishing boats were getting ready to go out. Each boat had a crew of about six people moving the boats on two well worn logs with a metal handle on one end to make it easier to move to the next position. When the boats were close to the water, the boat’s 75hp motor was wheeled down to it by another hombre and placed into position. The whole process was reasonably lengthy and quite relaxed with lots of breaks to wait for one thing or another to arrive. Eventually, the boats were rolled into the water and took off into the surf. 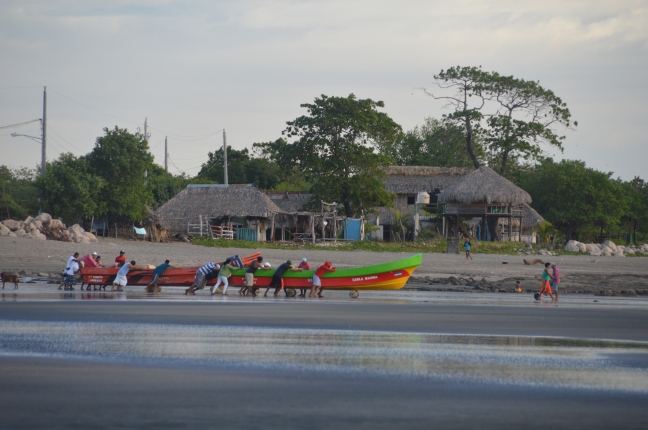 I continued my walk along the beach, past sparkling rock pools and a small rocky headland. Sea slugs were busy creating mantric patterns along the shoreline which glistened in the lowering sun. Out to sea, colourful fishing boats vied for better positions from which to harvest the ocean’s bounty. On the edge of the beach, thatch roofed shacks gradually gave way to lush vegetation. All was peace and absolute tranquility. 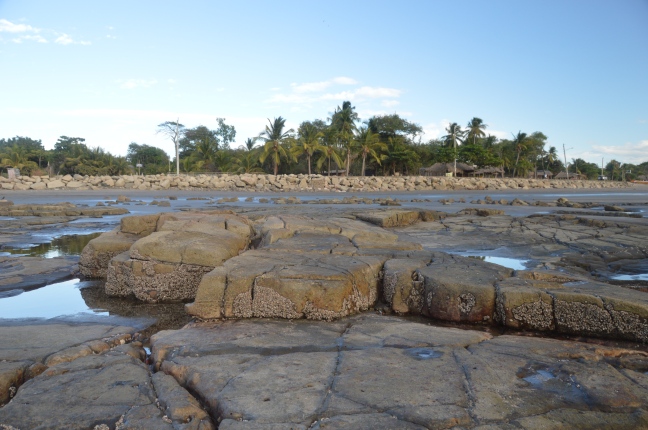 As was due to rock up at Mama’s house for dinner at 6.30 pm, I had time to grab a cerveza back at Rancho Tranquilo and watch the setting sun on the beach. One of Mama’s daughters came to collect me at 6.15 pm and walked me to the family house. Once there, I was sat at a table and presented with the most amazing meal of pan fried red snapper, rice, plantains and salad. There was so much food, I was struggling to get through half of it. Sitting in the breezeway of the family house, with family, dogs, pigs and chickens as my companions, I couldn’t have wished for a more blissful end to a perfect Nicaraguan day.