I found I survived the night reasonably unscathed. Not by threat of the Jícaro Gigolo wanting his love shack back, but by the myriad of mozzies wanting their fair share of my blood. A hole in the door a rodent could have comfortably scampered through was certainly no deterrent to the entire 5th Light Mosquito Brigade. And I had run out of bug spray. I doubted the thin sheet would have held off the invasion, but to my delight it did.

The affable señora of the house served me up a delicious local breakfast with possibly the worst coffee I had drunk in Honduras. I don’t know whether the Travel God of Foreign Foods was trying to prepare me for what lie ahead in El Salvador, but I prayed he just slipped up. After breakfast, it was standing on the side of the road again waiting for a bus to the border. At that particular point, there were heavy duty speed humps which slowed the continual stream of traffic to an almost halt. Local food vendors had taken good advantage of this and set up shop at this speed trap. Food and drink was thrust through windows of passing vehicles and it was amazing how much they sold. It seems everyone on Honduras eats on the run. 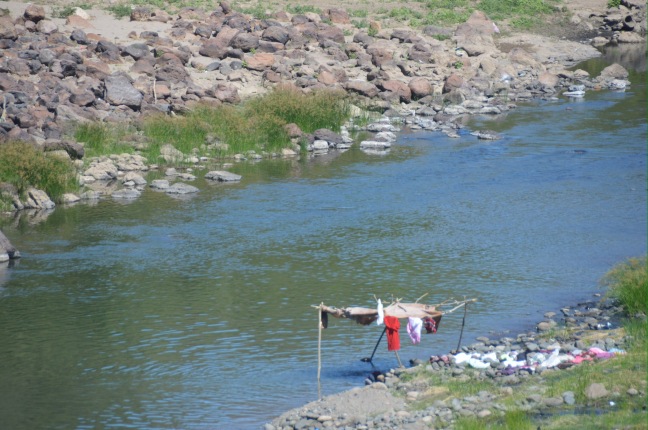 My bus finally came along and I jumped on board. I found the landscape in this southern part of Honduras was significantly different from further north. It was hilly, but the vegetation was sparse and dry. It was bitter sweet leaving Honduras as I had greatly enjoyed traversing her beautiful lands, but onwards I must travel to El Salvador.

To my surprise, the bus actually pulled alongside the Honduran Immigration office. This was a nice bonus, as often one has to catch some other form of transport to get from the ‘border’ town to the actual border. I changed my Honduran limpera for US currency and passed through immigration. On the other side of the building, one has to walk a few hundred metres past some little stalls and then cross a bridge to get to El Salvador on the other side. It was at this point that I realised that I still hadn’t got any bug spray and wasn’t going to risk another night without any. I asked around and ended up going back past the Immigration building to a shop where I bought the world’s most expensive can of bug spray (AUD8.65!!).

Back to the bridge, I crossed over into El Salvador. I wasn’t surprised that the immigration official carefully examined my passport as I had just done what would have looked like a Tour de Drug Smuggle. No questions this time though and I was passed through without incident. I walked up the road to where a bus was waiting and jumped on board. 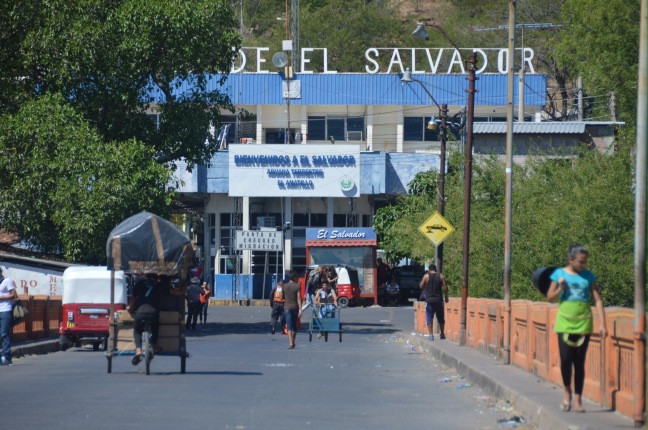 I decided I would first head up north to a little town with a big story. Perquin was the guerrilla stronghold during El Salvador’s civil war throughout the 1980s. In this region, some terrible atrocities were committed by government soldiers; including a massacre in nearby El Mozete where an estimated 757 people were massacred – of the 143 victims uncovered, 131 were children. It’s only in very recent years that there has been any kind of formal recognition of this event, so it is still very fresh in the local psyche.

I knew I had to take a few buses to get where I wanted to go. The first dropped me off at a crossroad where I waited on the side of the road for a north heading bus. I chatted with a local señora who was also waiting for the same bus and was heading herself not far from where I wanted to go. It turned out that there was a tourist office where she lived so she decided it would be best if I got off the bus with her so I could get some information. I didn’t really want to do that, but she was so persistent and helpful I sort of felt obliged.

After wounding our way through beautiful verdant hills and passing numerous little towns and settlements, we finally got off the rumbling bus at the tourist information centre. It was in a most unusual position – on the side of the road in the middle of nowhere! I climbed the stairs and was introduced to a young hombre who plied me with tourist map and let me pass. The helpful señora come back down and waited on the side of the road with me to help me get a communal pick up into Perquin. Pack thrown up into the tray above the cabin, I climbed aboard the covered back to squeeze myself with another twenty people. At least it was authentic Salvadorian travel!

I chose a hotel out of the guidebook and was dropped off nearby to walk the rest of the way. La Posada de Don Manuel got a great write up in the guidebook, however I didn’t rate it anywhere near as high. I’ve stayed in some filthy digs in my travels, but the communal bathroom at this place reached new levels of skank even for me! Still, it was cheap and the little family running it were lovely.

I had a couple of hours of daylight left, so decided to explore the little town. The road into Perquin ran up the side of a steep hill, past a pretty little cemetery. It was only 500 m, but felt much further in the sultry conditions. The town itself is perched on the side of the hill, with little pastel adobe dwellings fronting the narrow streets. Brightly painted murals abound on the walls of churches and civic buildings, and well tended gardens blazing with tropical colour add a whimsical touch to the vista.

Heading back down to my lodgings, I was surprised to come across the turn off much sooner than I expected. It was certainly a much easier traverse than going into town! I spent a very pleasant evening at the posada which, despite the rank bathroom, felt like staying with a local family.