Awoke to the headlines and detailed analysis of the recapture of the Mexican drug lord, El Chapo. What a media beat up! Everyone in Central America knows that the drug cartels are untouchable. Corruption goes to the very top in this part of the world. The Mexican authorities need to be seen to be doing something so they provide us with this thrilling little epilogue. Mainly to satisfy the Western World. Drug addicts around the world can relax, though. It won’t alter supply a bit. The only thing that does are the indefatigable efforts of law enforcement officers in other parts of the world.

I made my way back to the plaza restaurant I spent the previous evening at to meet up with Ricardo and help him put his restaurant on Trip Advisor. He was out when I arrived but wasn’t long in coming. I had never put a business on Trip Advisor myself before, but figured it would have to be fairly easy. And it turned out to be, though, still took hours due to Ricardo needing to take off and run errands and my iPad spitting the dummy and me having to re-enter all the info several times. We eventually achieved success (we hope…) but have to wait several days before it is live on the site. Although it took far longer than anticipated, I had a very pleasant time and it was nice to do something for a genuinely lovely person. 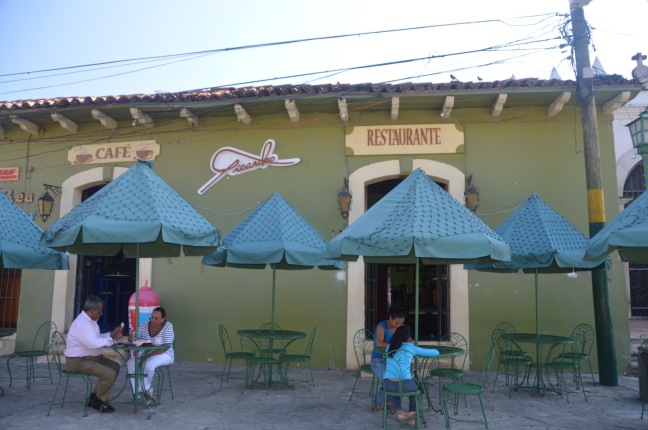 Ricardo offered to take me to pick up my pack from the hotel and drop me off at the bus terminal. It turned out that he also had a coffee shop at the bus terminal. As we walked across the plaza to his vehicle, I was stunned to see it was a Landrover Defender Td5. As a fellow Landrover driver, we now shared a common bond. Ricardo told me there are only 18 Defenders in the whole of Honduras. I had already seen one in the north, so there must be another 16 lurking around the country somewhere. 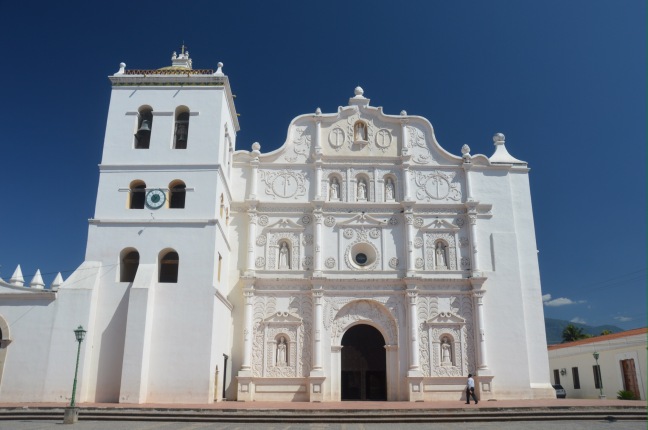 Pack collected and ticket purchased for next leg of the trip, I bid Ricardo adios. I knew I had a longish trip ahead of me with several changes so was keen to be on my way. As the old bus rumbled out of town and back onto the highway, I could see the spires of the magnificent cathedral poking up amongst the surrounding buildings. Although I didn’t spend a lot of time in Comayagua, it turned out to be quite a special place. 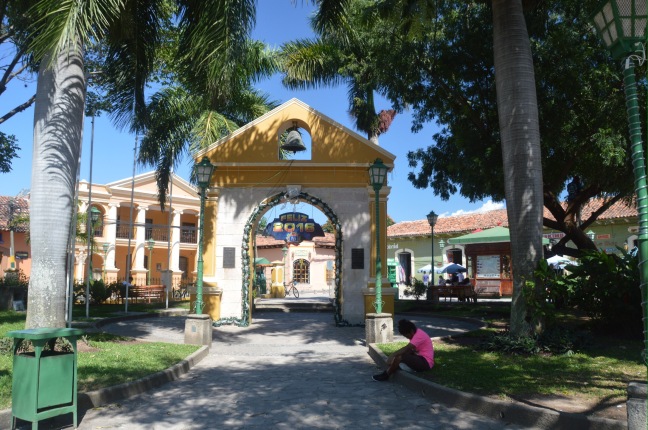 If wasn’t long before we were leaving the long flat valley Comayaqua is situated in and climbing back up into the mountains. The bus slowly chugged its way up the steep road which wound its way up and around the slopes. It was quite a slow trip as there were various roadworks holding traffic up at intervals. Local vendors had taken good vantage of this and plied the halted traffic with food and drink of all kinds. One never needs to worry about not finding something to eat in Central America. If you stand still long enough, something will come your way. And it’s usually fresh and tasty.

We eventually came to Lago de Yojoa and the terrain changed again; from pine tree clad hills to tropical forest. The road travels quite close to this vast lake and glimpses of its beauty could be gained on occasions out the bus window. The bus pulled into La Guama on the northern fringes of the lake and I was shunted into a minibus for the next leg of the journey. Through the little village of Peña Blanca and further onwards to the tiny settlement of Los Naranjos, where I was dropped off on the side of the road to walk the final 300 m to my digs for the next two nights. 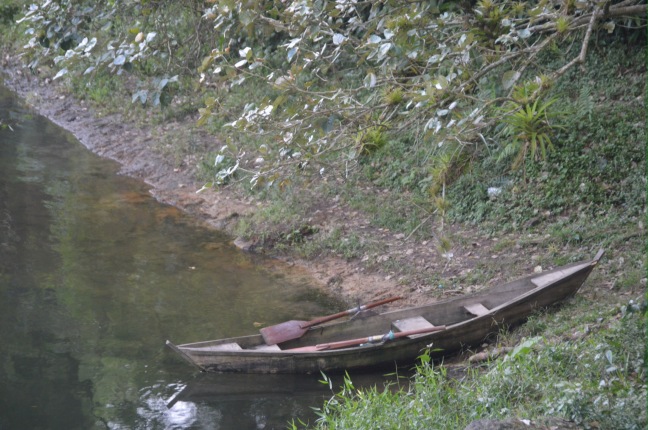 D&D Brewery and Lodge is run by a US expat who came to Honduras with the Peace Corp and stayed. Astonishingly good beer is brewed on site and in plentiful quantities for the parched traveller with a hearty thirst to slake. As an Australian, I considered it my national duty to sample the range on offer and found the blueberry beer to be a lot tastier than it sounded. I met the owner of D&D and told him I had read in the guidebook about some local caves one can do tours to. He was going to get back to me with further information but I heard nothing more that night. I chatted to the main tour guide, Walter, and some US airforce personnel who were on leave for the weekend, before retiring to my dorm hidden in the tropical gardens.