Up early, I checked out of ‘The Best Little Whorehouse in Trujillo’, grabbed something to eat in a nearby comedor and walked back down to the bus terminal. The Mosquito Coast does not sound particularly appealing, but I figured if it was good enough for Harrison Ford, it was good enough for me. I had no idea what time the transport legs I needed left, but Jorge had assured me I could get to my final destination in one day. It took me about an hour to backtrack back to Trocoa from where I needed to get a four wheel drive collectivo to Batalla. 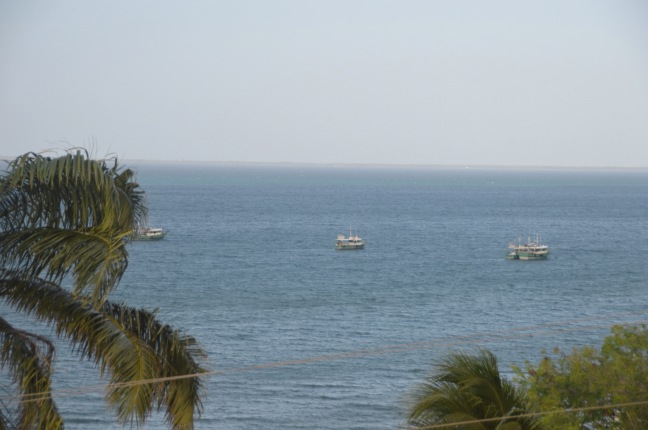 A collectivo taxi took me to the markets where the transport to Batalla left and I was soon relieved of my pack by an hombre with more gold in his mouth than a Mayan mine. I watched as my pack was securely wedged at the bottom of a growing pile of luggage. And then I waited. And waited. And waited. The offsider packed and repacked that many times I lost count as people wanted to retrieve packed luggage or add to it. It was interesting to watch the loads on the other four wheel drive vehicles gradually increase in height to towering stacks of up to three metres, lashed together with an assortment of nylon rope, none of which I would have relied upon myself. Just when you thought they couldn’t possibly add anything more to the mix, up would climb three or four people and perch precariously on boards lashed to the load. 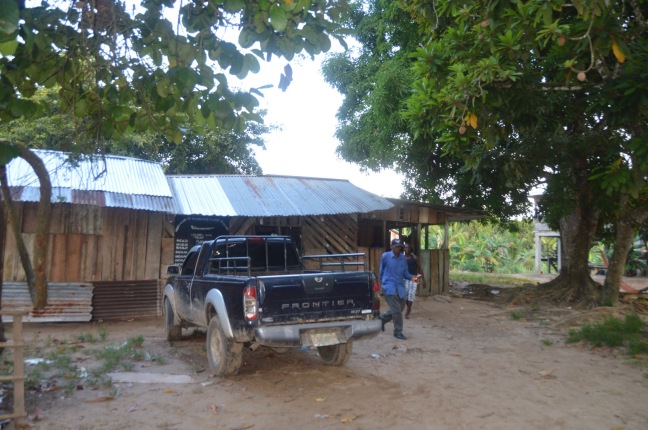 Finally, my ride was ready to leave and I jumped into the front of the vehicle. We were driving in a heavy duty Dodge 4WD so it was a bit more spacious than a standard 4WD. That said, there were eight people sandwiched in the cabin and another eight sitting on lashed boards atop the load. We turned off the main road and eventually the bitumen ran out. A dirt road took its place but it wasn’t in such terrible condition. I’ve driven on much worse dirt roads in Australia, but that is probably not saying much… The road travelled past pretty little farms with neat tree lined fences and livestock tranquilly grazing in fields; humble little cottages with neatly swept dirt yards and dogs languishing in the shade; and numerous military checkpoints. 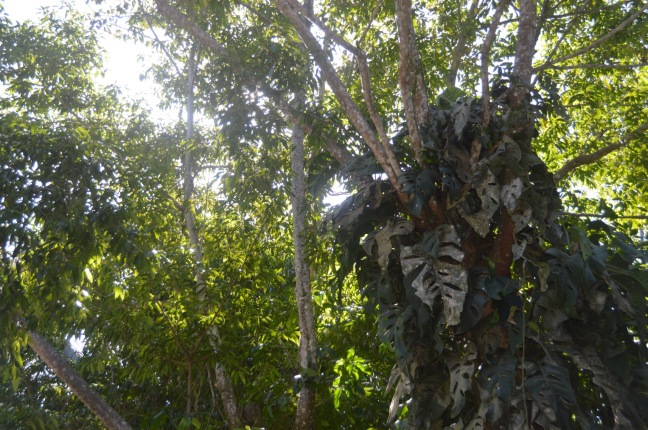 About half way through the trip, our driver pulled over to discover a flat tyre. We all piled out of the vehicle as the offsider set about changing said tyre. Unfortunately, the tyre brace didn’t match the diameter of the wheel nuts so was of no use. Several vehicles stopped, but did not have what we needed. Eventually, the offsider jumped into another vehicle with the non compliant wheel brace and got a lift to the next village. He returned about 20 minutes later with the correct size socket freshly welded onto the brace. As the weld was so fresh, everyone was reluctant to use it in case it broke. Other vehicles stopped and finally one had the correct wheel brace size. The spare tyre, balder than a monk’s pate, was duly exchanged for its deflated predecessor and we were again on our way. 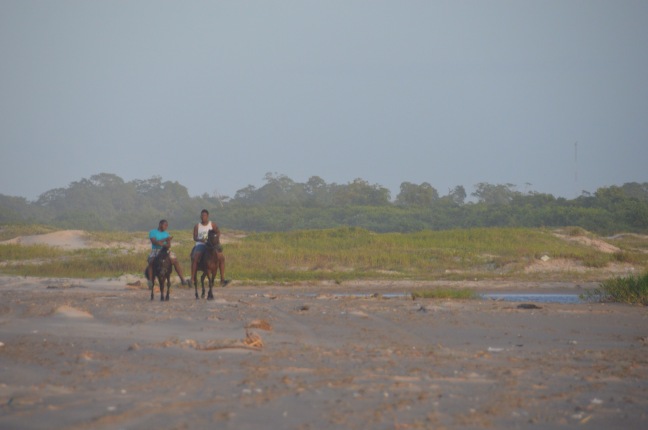 We stopped briefly in the next little village to plug the hole in the damaged tyre and sort out tyre pressure issues. Then we were roaring off again. Up until this point, I didn’t really understand the need for a four wheel drive vehicle as two wheel drive vehicles could have traversed the road relatively easy. That was until the road stopped in Iriona, about 20 kilometres away from Batalla. The driver turned left towards the beach and was soon driving on it, in and out of the tide at times. Now I understood the need for a four wheel drive! 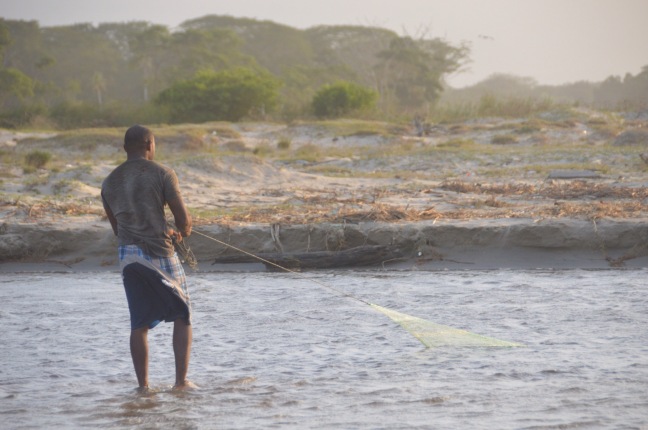 It was rather pleasant to be a passenger in a vehicle that wasn’t mine as we crashed through the waves, without the accompanying thought that Ole Neptune might decide to take your vehicle for himself. We drove on dune tracks and the beach the whole way to Batalla, passing through little Garifuna villages wedged between the sea and a river. Tilting mud brick shacks with palm leaf thatching and ramshackle little wooden buildings lined the dirt track that ran through the middle of the villages. Our passing caused much interest and merriment with the village inhabitants, seemingly all known to our driver. 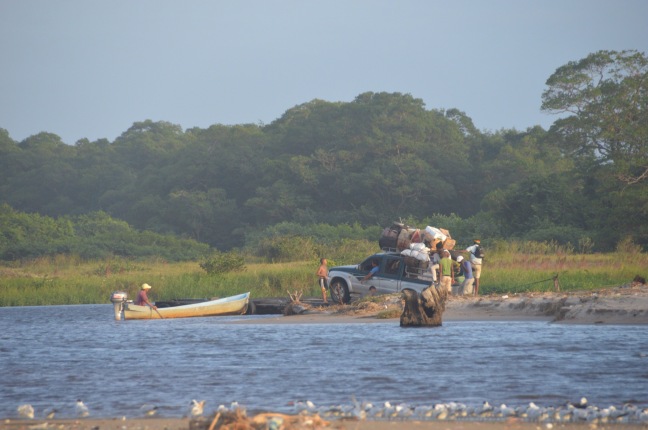 At one stage we came to a river crossing where the vehicle was guided onto a rough wooden pontoon just large enough to carry a vehicle such as ours. Two young boys pushed the barge away from the shore, then an hombre in a longboat with outboard on the back slowly powered the pontoon to the other side of the river. Once there, the two boys lined up the boards for our vehicle to drive off. 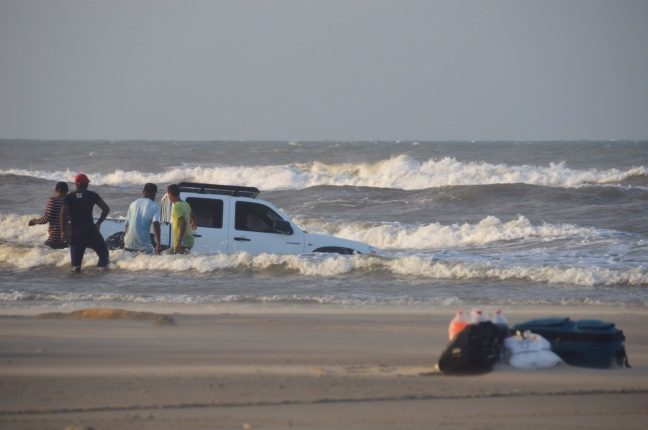 We noticed another four wheel drive vehicle stranded in the water at the mouth of the river, so our driver went to help. The passengers of the unfortunate vehicle were huddled forlornly together on the wind whipped shore with all the luggage strewn about them, looking somewhat like survivors from a shipwreck. We piled out again and our driver hitched his vehicle up to the waterlogged one with the ropes I hadn’t considered adequate to even tie a load. The tether was too long, of insufficient strength and the driver took off too quickly. All of which meant the venture was doomed to fail. An actual tow rope had been found and connected to the hotchpotch of tether, but to no effect. By this stage, the waves were lapping the bonnet of the vehicle. 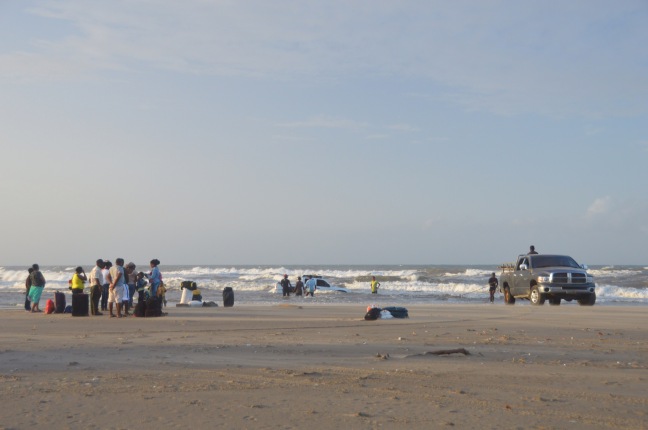 I bit my tongue until after about the fifth attempt them offered advice. I told them that I was from Australia and that this was quite common – not entirely true… To my astonishment, they listened and followed my directions. The tether was shortened and most of the rubbish discarded, the hombres by the stranded vehicles lifted and guided the vehicle towards the rescue vehicle when a wave came through, and the driver took off slowly with me yelling at him to go slow. Voila! One rescued vehicle. The doors were opened and water came cascading out. I put one of the novelty clip on koalas I carry to give to kids on the cross hanging off the rear vision mirror to remind the driver that it wasn’t the good Lord that saved his bacon, but an Aussie woman with a bit of nous. 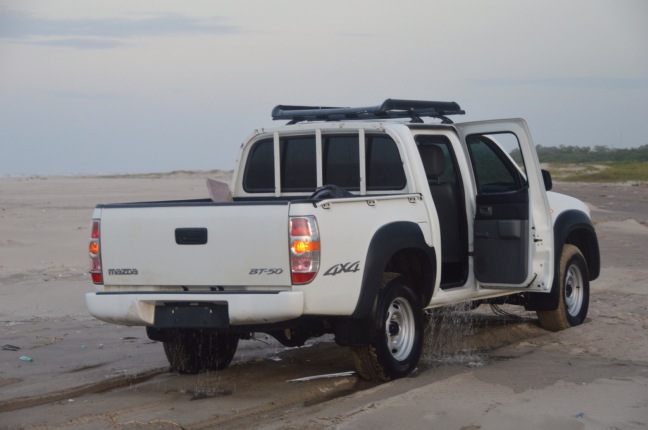 We piled back into our vehicle and roared off again down sand tracks to Batalla. It was almost dark when we finally reached the tiny village where I was hurried towards a 10 m fibreglass longboat. I had thought we would be making the boat journey to where Jorge recommended I stay the night by ocean and was pleasantly surprised to learn we would be travelling by inland waterways. I wasn’t particularly looking forward to an ocean crossing as these little boats sit low in the water and the wind had picked up. 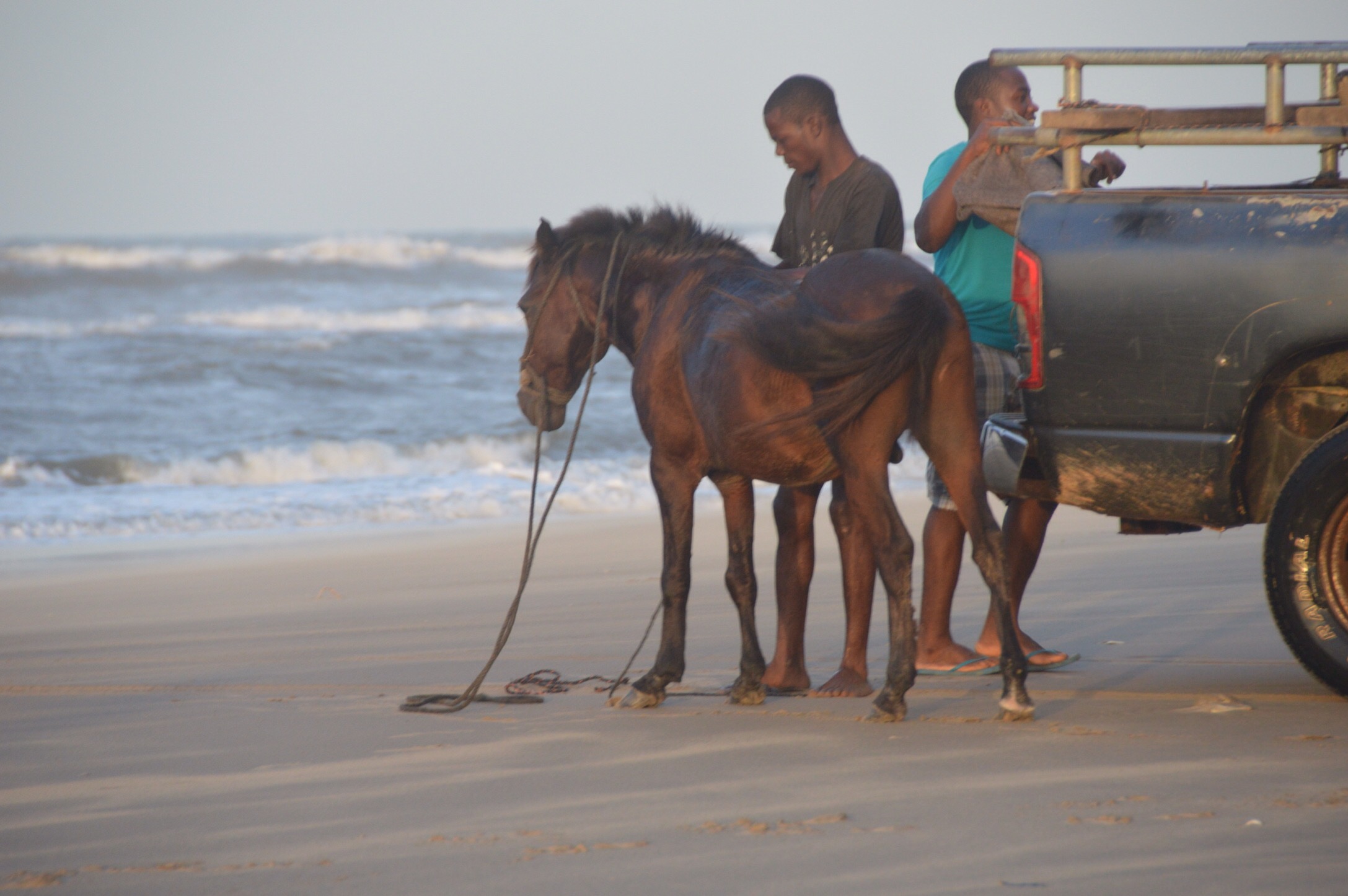 After stopping at a waterfront military checkpoint, we spluttered off down a dark river. I started chatting to the hombre next to me to get more information about where I was supposed to get off. It turned out that the place Jorge had directed me to was a private home and as it would be late by the time I got there, accompanied by the fact that I wasn’t expected, it was decided it would be better for me to progress through to Brus Laguna where there were hotels I could check into later at night. 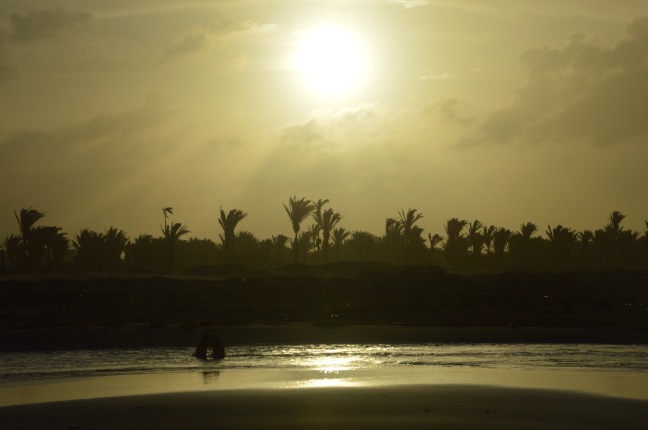 The little boat glided smoothly through silent waterways, slowing to find a darkened entrance to the next, all with the guidance of an hombre up front with a torch. We passed tiny settlements lit either by private generator or oil lamps as there is no electricity nor running water in this part of the country. La Moskitia is the most remote and undeveloped region of all of Central America, so a very special part of the world. Under a brilliant starlit night, we sped across Laguna Ibans, before negotiating another series of waterways connecting to Laguna de Brus. My final destination for the evening lay the other side of this vast lagoon. 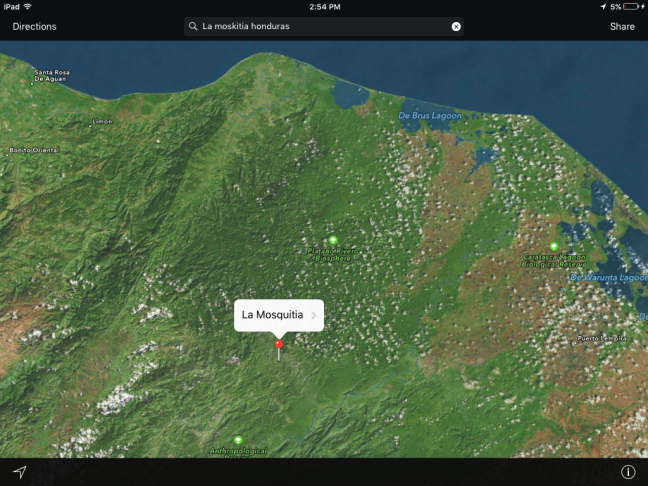 At the edge of the waterway that would lead us into Brus Laguna, our boat slowed to a halt and the two crew started shining torches around. A few minutes later, another smaller boat chugged along and pulled up alongside our own. Two hombres were on board and I thought I saw a handgun in the waistband of one of the men. I relaxed, though, when that hombre jumped on board and helped the crew to lift two large, heavy sacks from our boat onto theirs. Then, the unassuming middle aged woman sitting in front of me and the young boy sitting next to her climbed out of our boat and into the other. It wasn’t until the other boat sped off that my amigo, Bill, informed me that what I had just witnessed was a part of a drug smuggle. Bill didn’t seem in the least bit fazed and said it was extremely common. He said that Brus Laguna was the centre of the drug trade. Cocaine made its way from Colombia and money came down from the US. Exchanges were made here. Judging by the heavy thud of the sacks on the floor of the boat and the direction we were travelling, I would assume it was probably US currency rather than cocaine but I wasn’t about to investigate further. 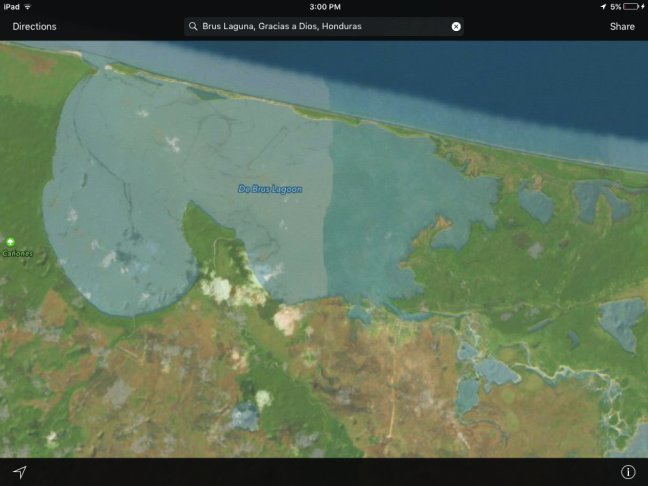 We putted on to Brus Lagoon. Just before the dock, one of passengers jumped out of the boat and swam away. Bill said he was probably evading the police. As these waters are teaming with giant alligators, you don’t go swimming in them without a particularly good reason. We docked and I gathered my backpack. It was at this stage that I noticed several shady señors lurking in the shadows. They looked as if they would roll me as soon as look at me. And looking at me they were. Intently. I kept them in my periphery vision and made sure I kept my distance as best I could. I needed to check what time the boat left to go back to Batalla in the morning and was dismayed to find it was at 4 am, meaning I needed to be back at the dock by 3.30 am. This was not the sort of place I wanted to be wandering by myself wee hours of the morn in the dark. 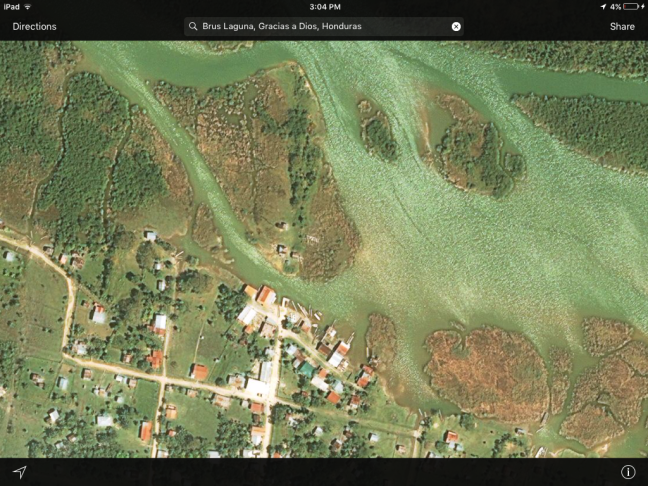 I got directions to the nearest hotel which thankfully was only a few hundred metres away. To check in, I had to go into a sketchy bar reminiscent of Mos Eisley Cantina of Star Wars fame. Limpira exchanged for room key and I was directed to my digs for the evening. It was arranged for one of the hotel staff to accompany me to the dock in the morning as I was heavily advised not to try going by myself. By now it was well past 10 pm and I had to be up at 3 am. Pumped with adrenaline, I found it difficult to doze off. I knew I was safe for the night but was not looking forward to running the gauntlet in a few hours time. Although I was well aware that I was venturing into Honduras’ badlands, I felt I had probably overstepped the mark on this occasion. Nevertheless, I eventually slipped into a restless sleep.